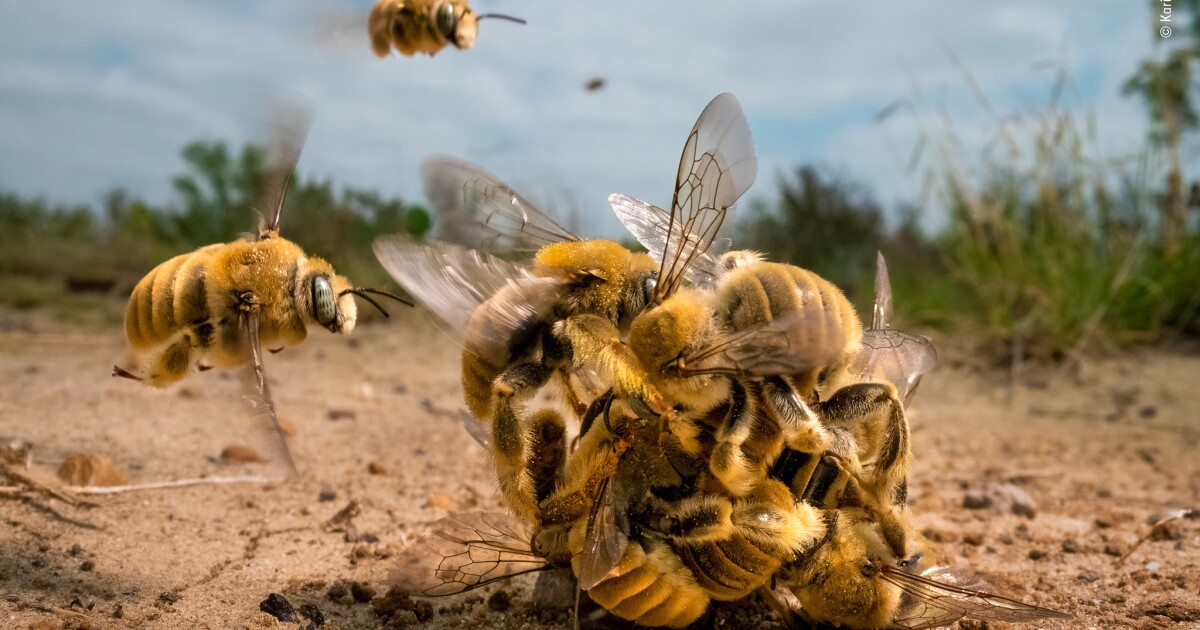 Have you ever wondered what it would feel like to witness the reproductive dance of a giant sea star, watch ibexes spar (from a safe distance), gaze upon sun-dappled mushrooms in a fairy tale forest, or meet the gaze of a polar bear through the window of an abandoned house? Now you can, thanks to the 2022 winners of the Wildlife Photographer of the Year awards.

London’s Natural History Museum, which runs the competition, announced the winning images this week and will display them in an exhibition set to open on Friday. It will eventually tour across the United Kingdom and other venues in Europe, as well as North America (including Texas and Michigan), Australia and New Zealand.

The museum said in a release that an international panel of experts had selected the 19 finalists out of more than 38,000 entries from nearly 100 countries, based on their “originality, narrative, technical excellence and ethical practice.” Then, they awarded two of those winners — one in each age category — the top prize.

American photographer Karine Aigner was named wildlife photographer of the year for a close-up shot of a “buzzing ball of cactus bees spinning over the hot sand on a Texas ranch” that she calls “The Big Buzz.”

All but one are males intent on mating with the single female bee at the center, the museum explains, adding that the bees are threatened by pesticides, climate change, habitat loss and disruptive farming practices.

Aigner is just the fifth woman to win the title in the competition’s almost six-decade history, according to organizers.

The meaning of the photo, and the win

Aigner told NPR by phone on Thursday that wildlife photographers spend a lot of time alone.

“So when you’re recognized for literally laying in the dirt, in the sun, destroying your camera gear, it reminds you that you’re part of a tribe who cares,” she says. “I’m grateful and thankful to the community that recognized the work I do, and I hope that somewhere down the line those accolades help make a difference to the animals that we care so much about as photographers.”

Aigner also reflected on the significance of being one of just a handful of women to win the top prize in more than five decades. She says it’s not lost on her that she was shooting photos of female bees, and also works with young female photographers as part of an organization called Girls Who Click. She feels the award is “for the girls.”

“This one’s for every girl out there who, in a male-dominated field, thought she couldn’t do it,” Aigner says. “Because you can do it, you can attain it, you just have to do it.”

As for how she did it: Aigner is based in Washington, D.C., but spends a lot of time in Texas, where she has long photographed families of bobcats (she describes her work as focusing on the relationship between humans and animals, especially “what we’re doing to them”).

Aigner happened to be driving down a ranch road when she noticed what appeared to be hundreds of small ant holes, and pulled over to take a look. They were actually the ground nests of cactus bees, which she has since learned have a fascinating life cycle.

Aigner hopes her photo will help raise awareness of native bees and the existential threats they face, specifically pesticide use and habitat degradation. Because cactus bees nest in specific parts of the ground, she explains, if someone starts paving things over they’ll have nowhere to go. Aigner even asked people on the ranch to avoid driving on that particular road while this process was happening, and they complied.

Even though most people won’t find this kind of bee in their backyard, Aigner hopes they will do more reading about native pollinators and how to help them.

“These animals are like the glue to the environment, and when we lose them, we lose our birds, we lose everything,” she adds. “We lose our flowers, because they pollinate everything. It’s a web of connection that we all do not pay attention to at all.”

The award of young wildlife photographer of the year went to 16-year-old Katanyou Wuttichaitanakorn, of Thailand, who captured an almost abstract snapshot of a Bryde’s whale surfacing near his boat to feed on small anchovies. It’s titled “The Beauty of Baleen.”

Wuttichaitanakorn was moved by the contrasting colors and textures of the whale’s “dark skin, pink gum and the brush-like mass of baleen hanging down from its top jaw,” the museum says, referring to the plates of baleen that certain types of whales use when lunge-feeding, in order to filter small prey from the ocean.

“Wildlife photographers offer us unforgettable glimpses into the lives of wild species, sharing unseen details, fascinating behaviors and front-line reporting on the climate and biodiversity crises,” said Dr. Doug Gurr, director of the Natural History Museum. “These images demonstrate their awe of and appreciation for the natural world and the urgent need to take action to protect it.”

Organizers will be accepting entries for next year’s contest — from photographers of all ages, experience levels and nationalities — between Oct. 17 and Dec. 8. In the meantime, check out some of this year’s champions:

Wildlife Photographer of the Year is developed and produced by the Natural History Museum in London.